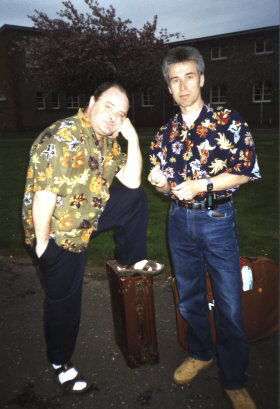 Tryst Theatre C are through to the Eastern Divisional Final of the SCDA One-Act Play Festival with their production of Rosencrantz and Guildenstern Are Dead (Act 1 - Excerpt) by Tom Stoppard.

Adjudicator Jim Gibson praised the director's skill in dealing with the large cast of nineteen as well as the teamwork demonstrated throughout the performance. He also thought that the two main characters worked well as a pair and that the opening empty stage was put to excellent use. The lighting and sound also received high praise.

The team picked up the East Stirlingshire District Trophy for beating the opposition, as well as the Barker Quaich for production and the Rose Bowl Award for stage decor, lighting and costumes.

The cast of nineteen included some new faces to the Tryst line-up, as well as the return of some old ones.

Paula Zak, younger sister of Stephanie (now in her third show with the club), appeared on stage with Tryst for the first time - as did versatile stage crew Bobby DeWar and Peter Tripney.

Returning to the club after a long period of absence, David Webster took on the role of the Player. Also back on the stage after a few years were Fiona Allan, Lorna Herd and Brian Tripney - last seen in Under Milk Wood and Frank Murray - normally seen front of house.

Two other recent additions to the club, Sarah Gardiner and Blaine Slater also took to the stage in their second Tryst show.

But the new faces were not only to be found on stage. Fiona's elder brother David (also in Under Milk Wood) did a great job on the sound desk and new director Alan Allan also gained recognition in collecting the production award.

The team now go through to the Eastern Divisional Final at the Adam Smith Centre in Kirkcaldy where they will perform first on Friday 29th March.