No Crisis For Drama Group As It Secures Second Spot 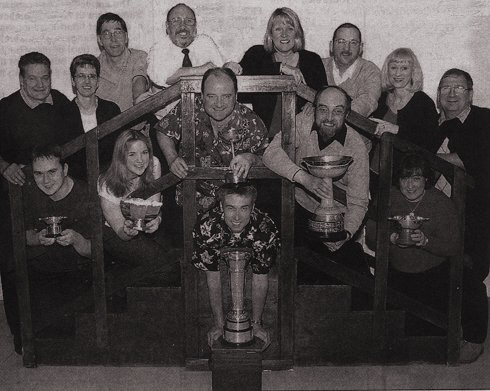 This roundup of Rosencrantz and Guildenstern Are Dead (Act 1 - Excerpt) appeared in the Falkirk Herald on the 16th of May 2002, written by Brian Marjoribanks and Robert Paul.

The Larbert amateur drama troupe travelled to Pitlochry to take its place in the finals of the Scottish Community Drama Association competition.

The production of Rosencrantz and Guildenstern Are Dead - Tom Stoppard's re-telling of Hamlet through the eyes of two minor characters - went down a storm, but Tryst was pipped at the post by Kirton Players, from South Lanarkshire.

The Larbert thespians were presented with the Jim Porteous Trophy - awarded in memory of the former Falkirk Players stalwart - for their efforts in finishing second in Scotland.

Although there is obvious disappointment at not making it through to the British finals, the Tryst team was understandably proud of its achievement.

Director Alan Allan said: "We're delighted to be second top in Scotland. Performing this marvellous play on the Pitlochry Festival stage was a memorable experience for us all and we wish Kirkton all the best for the British finals in July."

Tryst members are pictured with their six trophies from the SCDA competiton. In the Falkirk District round, the club finished in first place as well as winning awards for production and set design. Then in the Eastern Divisional Finals, held in Kirkcaldy, the club won first place again - and the production award. The Jim Porteous Trophy for finishing runner up in the national finals completes the season's haul for the talented troupe.