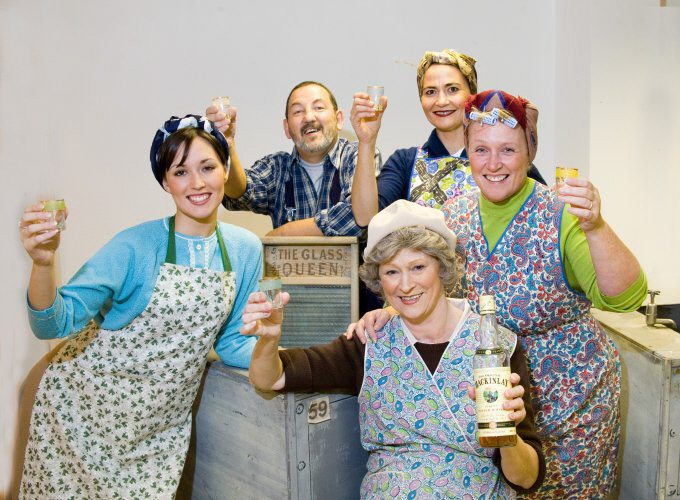 Scotland’s best-loved comedy will hit the Grangemouth stage in November.

Tryst will perform the comedy classic, The Steamie by Tony Roper, in Bowhouse Community Centre, and news that Tryst is staging the hilarious show has sparked a rush for tickets.

It’s Hogmanay 1953, and the women are gathered for the last wash of the year, sharing their secrets from the old year and their hopes for the new one.

As the washing is done, Dolly, Magrit, Doreen and Mrs Culfeathers sing, laugh and cry their way through the last working day of that year, with a little help from the increasingly not-so-handy Andy, played by Jim Allan who also directs.

Doreen, played by Stephanie Zak, is the youngest, and she dreams of a house in Drumchapel. Magrit, played by Rhona Law, is gritty and bitter. Dolly, played by Carol Clark, is the happy soul who can talk for Scotland. And Mrs Culfeathers, played by Dorothy Tripney, is the oldest, bone-weary through a life of drudgery.

Tryst President Frank Murray said: “Full of gallus patter in the Glesca washhouse, this warm, affectionate and often wildly funny play has become a firm favourite with audiences. It can have them rolling in the aisles with laughter one moment and wiping away a tear the next.

“And of course the Galloway’s mince scene is guaranteed to bring the house down.

“We last did The Steamie in 1992 when it was standing room only. Already our phones are ringing with people wanting tickets. It's going to be phenomenal.”

Tryst’s Steamie will be staged in Bowhouse Community Centre on Sunday 13, Monday 14 and Tuesday 15 November at 7.30pm.